Founded in 1985 by the husband and wife team, Bruno and Catherine Michel. Located just outside the Champagne hub of Épernay, this vineyard focuses on the "terrior" with M. Michel taking the pioneering approach of becoming an organic Champagne producer back in 1998, this was later confirmed when they were awarded Eco-cert certification in 2004 and is vegan friendly too. An assemblage of two grape varieties; Chardonnay takes the lead with just less than half Pinot Meunier finishing the blend off.  This is then aged for 7 years on its lees in vaulted, limestone caves, which were excavated by Benedictine monks in the 18th Century. The caves offer a constant cool temperature and humidity, which allow the flavours to develop and produce a simply exceptional bottle of Champagne.

FREE | TRACKED Delivery on orders over £90

Subtle opening, which opens up with aromas of orchard fruits, think apple & pears. Some toasted notes develop with a hint of blossom.

Opening flavours of quince, toasted pastries that develop with cloves and baked apple.

Beautifully long layered finish with a slight dry mineral quality to it.

There are no reviews yet. 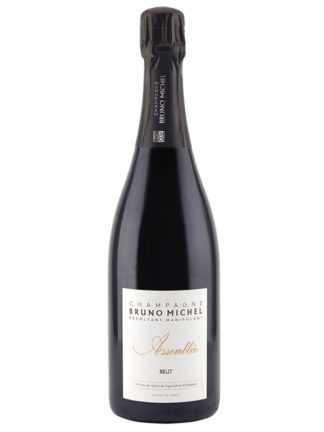 You're viewing: Bruno Michel “Assemblee” Brut, Champagne NV £32.95
Add to basket
We use cookies on our website to give you the most relevant experience by remembering your preferences and repeat visits. By clicking “Accept All”, you consent to the use of ALL the cookies. However, you may visit "Cookie Settings" to provide a controlled consent.
Cookie SettingsAccept All
Manage consent